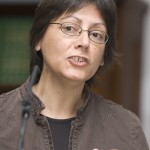 Yvonne Rogers is the director of the Interaction Centre at University College London and a professor of Interaction Design. Former positions include professor at the Open University, Indiana University and Sussex University; she has also been a visiting professor at University Cape Town, University of Melbourne, Queensland University of Technology, Stanford University, Apple and UCSD.  She is internationally renowned for her work in human-computer interaction, interaction design and ubiquitous computing. She was awarded a prestigious EPSRC dream fellowship to rethink the relationship between ageing, computing and creativity. She is passionate about designing computers that are engaging, exciting and even provocative. She has published over 200 articles, and is a co-author of the definitive textbook on Interaction Design that has sold over 150,000 copies worldwide and been translated into 6 languages.