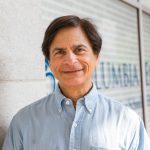 How can we build 3D user interfaces that help people collaborate more effectively? I will present research by the Columbia University Computer Graphics and User Interfaces Lab that explores the design and implementation of collaborative AR and VR environments. The experimental systems that I will discuss use different kinds of head-tracked eyewear and address a wide range of task domains, from remote maintenance assistance, to urban visualization, to motor rehabilitation. All were developed with our open-source Mercury Messaging toolkit for Unity (https://github.com/ColumbiaCGUI/MercuryMessaging), which supports cross-component communication among scene objects within and between computers.

Steve Feiner is a Professor of Computer Science at Columbia University, where he directs the Computer Graphics and User Interfaces Lab. His lab has been conducting virtual reality (VR), augmented reality (AR), and wearable computing research for over 25 years, designing and evaluating novel 3D interaction and visualization techniques, creating the first outdoor mobile AR system using a see-through head-worn display and GPS, and pioneering applications of AR to fields as diverse as tourism, journalism, maintenance, construction, and medicine.

Steve received an AB in Music and a PhD in Computer Science, both from Brown University. He is a Fellow of the ACM and the IEEE, a member of the CHI Academy, and the recipient of the ACM SIGCHI 2018 Lifetime Research Award, the IEEE ISMAR 2017 Career Impact Award, and the IEEE VGTC 2014 Virtual Reality Career Award. He and his students have won the ISWC 2017 Early Innovator Award, the ACM UIST 2010 Lasting Impact Award, and many best paper awards. Steve has served as general chair or program chair for over a dozen ACM and IEEE conferences and is coauthor of two editions of Computer Graphics: Principles and Practice.