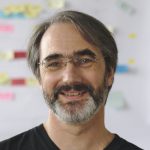 Even though today’s computers are used for many different types of tasks, they still rely on user interfaces designed for office workers in the 1980s. HCI researchers have produced a slew of innovative interaction styles, from gestural interaction to mixed reality and tangible interfaces, but they have not replaced traditional GUIs. I argue that we must devise fundamental principles of interaction that unify, rather than separate, these interaction styles in order to support the diversity of uses and users. I describe ongoing work on my ERC advanced grant, ONE, which explores how the concepts of information substrates and interaction instruments can help us create digital environments that users can appropriate and (re)combine at will.

Michel Beaudouin-Lafon is Professor of Computer Science, Classe Exceptionnelle, at Université Paris-Sud and a senior fellow of Institut Universitaire de France. He has worked in human-computer interaction for over 30 years and is a member of the ACM SIGCHI Academy. His research interests include fundamental aspects of interaction, novel interaction techniques, computer-supported cooperative work and engineering of interactive systems. He has published over 180 papers and is an ACM Distinguished Speaker. He heads the 22M€ Digiscope project and is the laureate of an ERC Advanced Grant. Michel was director of LRI, the laboratory for computer science joint between Université Paris-Sud and CNRS and now heads the Human-Centered Computing lab at LRI. He is also chair of the department of Computer Science at Université Paris-Saclay (2400 faculty, staff and Ph.D. students). He founded AFIHM, the Francophone association for human-computer interaction and has been active in ACM and SIGCHI for over 20 years, including sitting on the editorial boards of ACM Books and ACM TOCHI, on the ACM Council and ACM Publications Board, as founder of ACM Europe and EUACM, and as vice-chair of the newly created ACM Technology Policy Council. He served as Technical Program Co-chair for CHI 2013 in Paris (3500 participants) and received the ACM SIGCHI Lifetime Service Award in 2015.