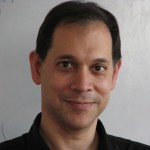 Sometime in the next five to ten years, millions of people will start wearing light-weight mixed reality glasses. Your hologlasses will be able to display extremely realistic 3D computer graphics, which will appear to exist in the world itself, and will be capable of locating and identifying the objects, people and places around you, wherever you go. This will be the dawn of what might be called the Age of Computer Graphics. Virtual objects will appear to float in the air between us, and young children will simply take for granted that they can draw in the air with their fingers, just as we now take for granted the magic of the telephone and the internet.

There will be many consequent changes to our shared public space. Physical signs will gradually be replaced by virtual ones, and navigation aids we currently associate with Google Streetview will simply be part of our visual landscape. But the changes to the next generation will be far more profound. Children who grow up in a world where gesturing in the air produces visible results will start to evolve language itself. They will invent ways to communicate and interact with each other that we cannot yet imagine.

In the intervening years, a continuum of experiments and prototyping experiences need to be done, to understand how people will socially engage with each other, and how they will go through their day while wearing their hologlasses. At the NYU Future Reality Lab, we are dedicated to creating those prototype, and to working with domain experts in many areas to understand the implications of the coming Age of Computer Graphics.

Ken Perlin, a professor in the Department of Computer Science at New York University, directs the Media Research Lab, and is a participating faculty member at NYU MAGNET. His research interests include future reality, graphics and animation, user interfaces and education. He received an Academy Award for Technical Achievement from the Academy of Motion Picture Arts and Sciences for his noise and turbulence procedural texturing techniques, which are widely used in feature films and television, as well as the 2008 ACM/SIGGRAPH Computer Graphics Achievement Award, the TrapCode award for achievement in computer graphics research, the NYC Mayor’s award for excellence in Science and Technology and the Sokol award for outstanding Science faculty at NYU, and a Presidential Young Investigator Award from the National Science Foundation. He serves on the Advisory Board for the Centre for Digital Media at GNWC, and external examiner for the Interactive Digital Media program at Trinity College. Previously he served on the program committee of the AAAS, was general chair of the UIST2010 conference, directed the NYU Center for Advanced Technology and Games for Learning Institute, and has been a featured artist at the Whitney Museum of American Art. He received his Ph.D. in Computer Science from NYU, and a B.A. in theoretical mathematics from Harvard. Before working at NYU he was Head of Software Development at R/GREENBERG Associates in New York, NY. Prior to that he was the System Architect for computer generated animation at MAGI.