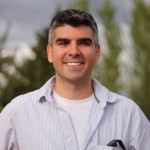 We have been investigating how depth sensing cameras and projectors can be used to enable highly immersive and interactive augmented reality experiences. In contrast to head-worn displays, such projector + depth camera systems offer the ability to create wide-field-of-view immersive augmented reality experiences without the user having to wear any additional gear. While large-scale projection mapping installations have become familiar forms of artistic expression, our work showcases how one can leverage the unique capabilities of today’s depth cameras and fast GPUs to enable real-time projection mapping on any surface (including deformable moving surfaces), thus enabling truly interactive experiences.  In this talk, I present a progression of research prototypes, each one exploring a different use scenario, while discussing the challenges in authoring such experiences. I draw examples from several highly publicized projects such as OmniTouch, IllumiRoom, and RoomAlive, as well as highlight the recent release of our open source RoomAlive Toolkit (https://github.com/Kinect/RoomAliveToolkit/).

Hrvoje Benko is a Senior Researcher at Microsoft Research. He explores novel interactive computing technologies and their impact on human-computer interaction. In particular, his research interests include augmented reality, touch and gesture-based interfaces, depth sensing, and display technologies. He helped found and lead the Microsoft Touch Mouse project and he has extensively collaborated with the Surface Computing group at Microsoft. He has been active in the human-computer interaction field, authoring more than 50 scientific papers and journal articles, as well as serving as the General Chair (2014) and the Program Chair (2012) of the ACM Conference on User Interface Systems and Technology (UIST). For his publications, he received several best paper awards at both ACM UIST and ACM SIGCHI. Before joining Microsoft, he obtained his PhD at Columbia University. More detail can be found on his website: http://research.microsoft.com/~benko/.